A place for your creative output - music, photos, videos, poetry, whatever

We're gearing up to release a new record on the 24th of March. It's called Doctors and Dates, and it's pretty different to anything we've released in the past. We recorded it live in the studio with the current band line-up with very little acoustic guitars. 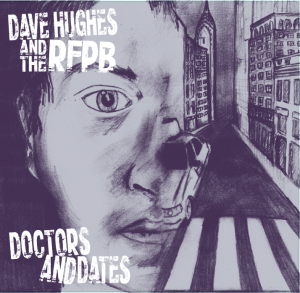 You can pre-order it now at http://davehughes.bandcamp.com/album/doctors-and-dates

When pre-ordering, you will get the 'lead-off single' Luath St Stories, which you can see the video for here: http://www.youtube.com/watch?v=eDCKnVSa0tc

And, finally, here's the liner notes I wrote for the website about the new record.


Dave’s thoughts on Doctors and Dates

After the release of In Death Do We Part? and the subsequent tour, the band needed to re-group. Whether or not the band was over was a topic on all of our minds, and led to the cancellation of several gigs through March and April. While staying in a rented apartment in Kilburn, London, I wrote a wee riff on an acoustic guitar that didn’t sound like anything we had done before. That was expanded to become Luath St Stories and effectively restarted the band.

On returning to Glasgow, we booked several long days of rehearsal where we could write music as a band, with lyrics coming later (something that we’d never really done, most songs were brought by me for the band to play along to). These sessions produced the full band, finished version of Luath St Stories and an instrumental City of Us.

Shortly after the In Death Do We Part? Tour, I entered therapy to deal with many, many years of running away from issues that had haunted my personality. The title track, written while I was living in Brooklyn (NYC), Doctors and Dates deals with this ongoing process. The lyrics to City of Us, Queen of the Drama Queens, History, Sis, and The Boneman were all written at this time. City of Us sees the human mind as a city of a thousand voices on the verge of a revolution which could go either way, with rejuvenated older track Call off the Coastguards playing out as the aftermath before recovery.

The Boneman and Drama Queen originally started at the same song about the effect that Twitter and Facebook etc have on our inter-personal relationships. It didn’t really work as a singly song, so I cut them up and vastly changed the theme of The Boneman to take on the culture of electronic waste. History, Sis began life as a drum machine demo with a Bo-Diddly beat, written on my last nights in New York in a bar called Milano’s on East Houston St. The ‘east’ in the song is the East Coast of America, which is West from Glasgow, and also a wee bit about Dundee which is on the East of Scotland. On returning to Glasgow, the song was slowed right down and given a 1978 Springsteen sound. This was perhaps the most complete demo that I gave to the band to record.

We recorded the album as live as possible in our new studio and rehearsal space in Greenock, right next door to our drummer Woody’s tattoo studio.We have a set-up in which the band is in one room, and everything is fed through to a multi-track recording desk. Over two days, we played through each song several times, recording everything and then chose the best take of each for a few overdubs (mainly second guitars and vocals). It’s the closest we’ve ever came to having the actual band on tape.

While listening to the record, you can almost play the game of “What band/song are the band ripping off here?”. We approached a lot of the songs with a view to pay homage to our favourite bands. There’s some Green Day, some Mischief Brew, some Wonder Stuff, some Gaslight Anthem, and of course some Springsteen in there.

We hope you enjoy it.

Ha, if all your songs are as well written as the liner notes, you've got it made. I found your description intriguing, and thus I ordered. I love the downloaded song. Yes, I recognized some lyrical references, but it is a blend of sounds (along with your voice) that make it unique. I think it works. Can't wait to hear more.

Really like Luath St Stories and thoroughly enjoyed In Death Do We Part last year. Will definitely be preordering after payday on friday
crap at dancing and can't hold my drink...
Shows: Lincoln 24/11/12, Nottingham 09/02/14, Y Not Festival 03/08/14
Top

Thanks very much guys! There's been an immense response to Luath St Stories, made the three of us very, very happy.

We're also doing a run of dates around the UK to promote this (before I go off to Germany for some solo shows).

A nice wee write up of the album courtesy of Last Year's Girl : http://lastyearsgirl.pixlet.net/upcomin ... and-dates/


As a long-time fan of Dave Hughes & the Renegade Folk Punk Band – well, we don’t call them the LYG house band for nothing – I’ve been privy to the evolution in their sound. The closest comparator I can find for the uninitiated is probably the Pogues: there’s a certain ramshackleness to it, a proper raucous knees-up of a live show, but make no mistake – the band is tight as fuck.

The trio’s new mini-album, Doctors and Dates, is out next month. Musically, it’s a progression from the glorious full-band sound that characterised In Death Do We Part? highlight “Spirit Mahone” – in fact, these days there is even a little Gaslight Anthem in clattering opener “City of Us”; on the jaunty, woah-woah-oah la-la-la chorus of “Queen of the Drama Queens” and shimmering through the too-hummable-to-be-autobiography title track. There’s no denying Dave can rock it up when the amps are turned down, and his vocal performance on haunted shanty “The Boneman” is genuinely creepy (I like to call his singing style storied, rather than lived in, because he’s younger than me) but it’s when Woody’s drums kick up a notch and Dan’s bass, effortlessly cool, grounds the song that it becomes something worth bragging about.

Doctors and Dates is seven tracks from a band that has found its sound. We should all be so lucky.

Another review of the album, this time from Louder than War.

My favourite bit in particular:

This record is a must for anyone who is keen on the early days of Green Day, the later days of the Clash, and, as always, Bruce Springsteen. Even though the record veers off in directions different to what regulars of DH&TRFPB shows might know and love there is still a huge over-arching influence from ‘The Boss’. I guess a tiger can’t truly change his stripes, but when the outcome of that beast attempting to shed its skin is a record like Doctors and Dates, why the hell would he want to?

They look pretty cool if I do say so myself...

We're posting out the orders a week today, so if you want a copy, head over to http://davehughes.bandcamp.com

smithyramfan wrote:Received my CD this morning. I'm not much of a reviewer but I am very much enjoying it

Glad to hear that it arrived, and that you are enjoying it!
Top

smithyramfan wrote:Received my CD this morning. I'm not much of a reviewer but I am very much enjoying it

Just got my download, and I too am not a reviewer, but I know what I like. And I like this, and I'm sure most folks on this forum would enjoy it, also.
shows? 90 so far...
Top

darlenet. wrote:Just got my download, and I too am not a reviewer, but I know what I like. And I like this, and I'm sure most folks on this forum would enjoy it, also.

Thank you very much! And thank's for taking the plunge and trying it out from zero!

I've also added the lyric sheets to the bandcamp download (had a few emails asking for them), but if you've already downloaded the album, you can get them here: http://www.davehughesmusic.co.uk/bootle ... cSheet.pdf
Top

Heading to the continent to play my first shows in The Netherlands and Germany next week.

DaveHughes wrote:Heading to the continent to play my first shows in The Netherlands and Germany next week to promote this record.

Full Details and maps at http://www.davehughesmusic.co.uk/gigs.php

Return to “Try This At Home”