Talk about upcoming shows, discuss shows that have happened, this isn't rocket science you know

Ah great, now that eventim posted the tickets all the scams put them up online. But what can you do. (I think they all laugh about it.)
Top

SusanneD wrote:I was at a huge concert once where the tickets actually had the names printed in but nobody ever checked it against an ID at the doors. At least we weren't checked. Maybe they did check some occasionally but it would take too much time to ID check everyone of thousands of guests. I have a tiny hope at least that these measures deterr some of the 'casual' scammers. The 'professional' ones just laugh about it, I'm afraid.

They've tried it with football over the years - but I've never had a check against ID. When you have a mass of people trying to get in close to kick off - or the show start time - they'd be asking for trouble keeping people waiting. It's always going to happen. Fortunately the touts get their fingers burnt at times and you see a load of tickets for sale on StubHub for way below face value.
Top

North Alone will Support FT on the upcoming german gigs! 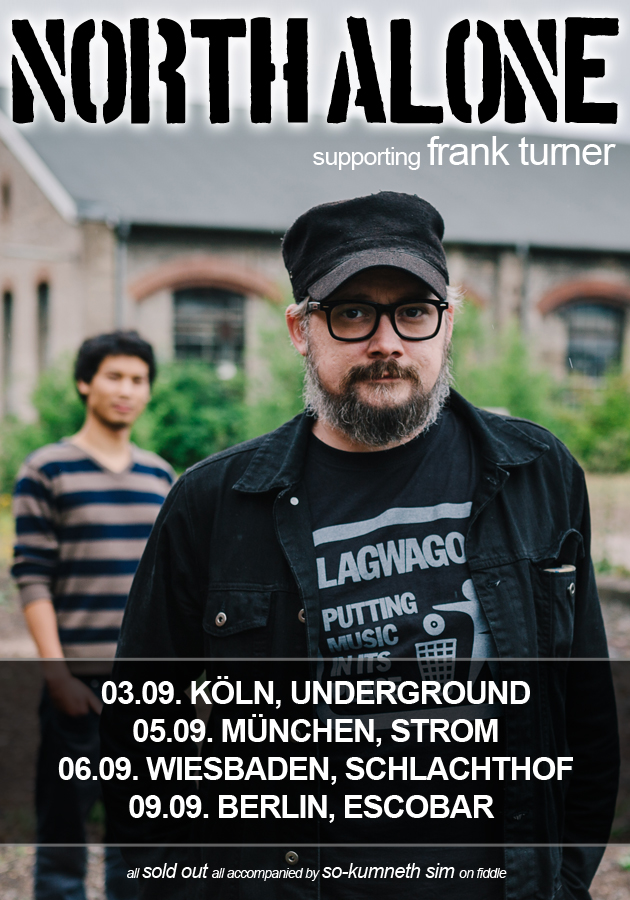 Are there any rumours about more german gigs in January? FT said something about that at the munich gig ...
Top

Not sure when exactly in the new year, but I think I heard him say to someone outside after the show in Cologne that tour dates will (or might?) be announced this week!!!

"And the only things that holds me back are the things I hold inside..."
52 gigs. 26 cities. 6 countries.
Twitter/Instagram: @dennasus
Top

Yeah, there's a big European tour coming up in January (and leading into February a little bit, if I'm not mistaken)... And indeed, he said it'd be announced "very soon"

Wait, have you been to the gig in Cologne? And got tickets for Amsterdam? Could it be that we've met in Cologne? Front row and waiting outside afterwards? I was the one without the guitar

If so, Hi! Have fun at the gig on Friday!
"And the only things that holds me back are the things I hold inside..."
52 gigs. 26 cities. 6 countries.
Twitter/Instagram: @dennasus
Top

Ha! Yes, that would've been me. Good to put two and two together - it was lovely meeting you both!

I was maybe the luckierst bastard of this round and made it to four of five gigs. It's been amazing and as I know there are many people who wanted to go there.. just a little hint. Really soon there will be three (solo) bootlegs floating around the internet (for free of course!).

I've been at the Escobar in Berlin and couldn't be happier about it. Such a fun gig in the midst of a shitty week. I'm looking forward to the bootlegs.

It was a great set as usual.
I loved that he played Balthazar and I Am Disappeared which made me cry a bit (a lot) along with Get Better (happy tears this time).

January can't come soon enough. Next time I'll drag along my colleague who asked my why I went again cause I've seen him "recently" (well in June) so she get's it.
Top

Here we go, quoting myself from the FTA:


Hej guys,
the last gig with four tiny shows here in Germany have been amazing, I met so many FT gig buds (again), felt in love with the Souls (again) and listened to so many rare songs - it felt like a dream. Like a fucking dream. It still does And I know, many people tried to get tickets and didn't get any - I got them for four shows. And maybe some of this group will never have the chance to see Frank in front of 100-300 people or even have a gig on a boat. So I decided to record the last three gigs (Wiesbaden, Hamburg, Berlin) and put out bootlegs for free (of course!). Hand them out to your friends, enjoy them - if I ever hear about one of my bootlegs handed out for money, feel free to burn in hell.

! Excellent Wiesbaden recording - can't wait for the others to load. I love it when people do this - I'm from Canada & Frank Turner gigs are few and far between and I do so love to hear him play live.
Top

That's brilliant, thank you so much!

Link is not working at the moment though. Can't wait to Download the shows:)

"Error (429)
This account's public links are generating too much traffic and have been temporarily disabled!"

Should be working again soon I reckon!
Top

Yes that's the problem with dropbox, reuploading it right now.. but here we go with HAMBBURG, Show #1725!


And on we go, here's another bootleg from the current promo tour. Last tuesday Frank was playing on a boat (for 120 people), 90 tickets were sold and the crowd was kinda odd for this tour - there was a lot of talking during the older songs (like during my request Jet Lag). Officially we were cruising around the harbour in Hamburg, but as Frank says we were on open waters and he choosed some sea themed songs for this set. What else to say? Shortest set of the tour, as the boat left at 7pm and had to be back at 9pm and... yeah - maybe you'll hear a friend and me singing from time to time, as we were really close to the recorder (there was no place to pack it away - check my current cover photo) & sometimes you here Frank laughing as it was shaky from time to time.

As I said before, share it with your friends for free. If you charge people for this bootleg, burn in hell! Cheers! <3

Banter
Sailor’s Boots
Get Better
If Ever I Stray
I Knew Prufrock Before He Got Famous
The Fastest Way Back Home
Tattoos
The Opening Act Of Spring
The Way In Tend Do Be
The Ballad Of Me And My Friends
Josephine
Sea Legs
Love Forty Down
Jet Lag
I Am Disappeared
The Road
MIttens
Recovery
The Next Storm
Photosynthesis
I Still Believe
Somebody To Love (Queen Cover)
103 gigs in 21 countries...
moving, keep moving - the tour never stops.